Difference Between 4G LTE and VoLTE?

LTE and VoLTE both are common branches of mobile internet evolution. 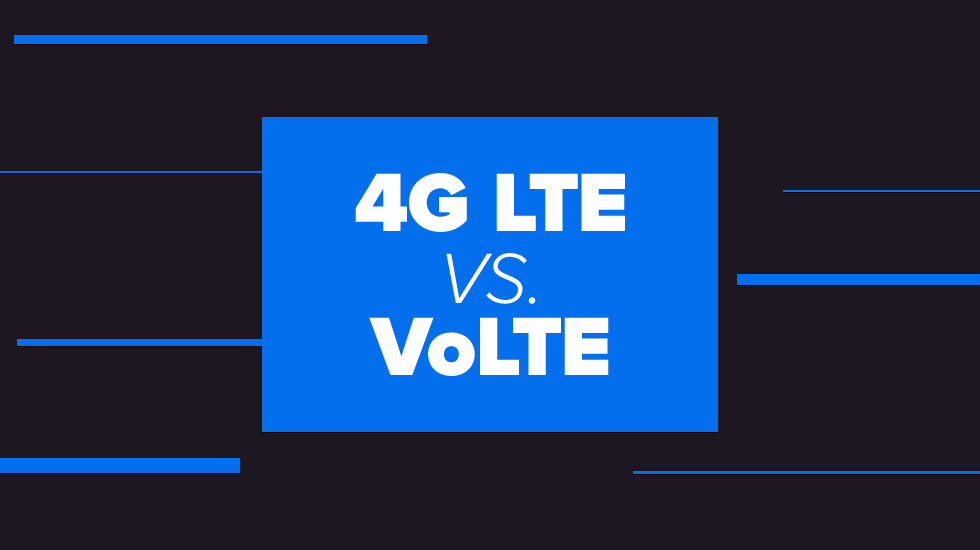 Introduction to LTE and VoLTE

LTE is one of the protocols which is being used to transfer a large amount of data over the internet. Generally, the average speed of LTE is somewhere around 50Mbps, which may vary in different cases but 4 to 12 Mbps are common.

VoLTE which stands for Voice over LTE, it is more or less than exactly what it says, it is another upgrade to LTE which allows technology to broadcast telephone communication over LTE.

Traditionally when we use LTE and someone tries to call us while we are using the internet, our mobile network used to switch back to 3G or 2G to establish a call, but in VoLTE’s case it does not switch the connection but uses the same connection to establish voice communication. Such kind of communication is also known as HD voice calls.

Which Technology is Better

In short, the latest one (VoLTE) is always better, as it has more benefits than the previous one (LTE). If we consider our mobile device which relies on battery power, VoLTE would be better than just LTE.

on other hand LTE-based device will always search for connections if there are many calls are made and it will switch many times between 4G, 3G, or 2G connections, whereas VoLTE will use the same connection always, whenever you call or use data.

What Are the Benefits of VoLTE?

Superior Call Quality or HD Calls: The big advantage of VoLTE is that call quality is superior to 3G or 2G connections as far more data can be transferred over 4G than 2G or 3G. Up to three times as much data as 3G and up to six times as much as 2G to be precise, making it easier to make out not only what the person on the other end of the line is saying, but also their tone of voice. Essentially it’s an HD voice call and it’s a much richer experience overall.

Improved Coverage and Connectivity: VoLTE can connect calls up to twice as fast as the current methods and as 2G and 3G connections will still be available when there’s no 4G signal it simply means that there’s greater mobile coverage overall, as currently places with a 4G signal but no 2G or 3G means that one you can’t make or receive calls.

You might think that would be a rare occurrence, but some of the frequencies that 4G operates on, such as the 800MHz spectrum, have far greater reach than 2G or 3G spectrum, so you’ll be able to get signal further away from a mast or in buildings which other signals struggle to penetrate. Indeed, Three is fully relying on its 800MHz spectrum for VoLTE calls.

However, while 2G and 3G services would likely remain they wouldn’t be as necessary as they are now and much of the spectrum used for 2G, in particular, could potentially be repurposed to increase capacity on 4G networks.

Better Battery Life: Anyone who currently uses 4G could also find their battery life increased with VoLTE, as right now whenever you make or receive a call your phone has to switch from 4G to 2G or 3G, since 4G calls aren’t supported (other than on Three Super-Voice) and then once the call is finished it switches back again. All that switching, plus the need to search for a different signal each time, can give the battery a significant hit.

Video Calling: It’s also theoretically possible to make video calls over 4G, much like a Skype call except you’d just use your mobile number and be able to use the regular dialer and call interface, so you can make and receive video calls from anyone else with VoLTE, rather than relying on separate accounts.

In fact, you may have noticed that Skype and other existing video calls services often seem to have a superior audio quality to voice calls. That’s because like VoLTE they use more data as part of a similarly named VoIP system, so you can expect your voice calls to start sounding more like Skype calls, but they won’t hit your battery life as much as Skype does.

Not only could video calls become native to the dialler, but other Rich Communication Services (or RCS’s) could as well, such as file transferring, real-time language translation and video voicemail and there may be applications which haven’t even been thought up yet.

As VoLTE is tied to data it could also mean that you won’t have to worry about how many minutes you use, as everything will fall under data use.

Are There Any Limitations of VoLTE?

Initially, there are a few. For one thing in some implementations, it only works if both the device making a call and the one receiving it support VoLTE, so in the early days you might find yourself quite limited in terms of who you can actually use it to contact.

Depending on how the networks set it up there also may or may not be network interoperability at first, so it’s possible that initially, you may only be able to use VoLTE to call people on the same network as you.

VoLTE also potentially requires both participants on the call to have 4G coverage. As that’s not yet as widespread as 2G and 3G it means that VoLTE calls won’t always be available and if someone moves out of 4G coverage during the call there’s a chance that the call will be dropped.

Finally, pricing may be an issue. Since VoLTE ties into data it may be the case that calling becomes more expensive than it currently is, depending on what networks decide to charge.

All of these problems are likely to be short-lived though as 4G coverage increases, more devices begin to support VoLTE, prices stabilize and networks align their technology. In fact, some version of the service suffers from very few of these problems, with the only major ones being the lack of VoLTE coverage and limited support for existing handsets.

Why Haven’t We Been Making Calls Over 4G with VoLTE All Along?

The problem with Voice over LTE is that 4G LTE is a data-only networking technology, so it doesn’t natively support voice calls. While 3G and 2G were primarily designed with voice calls in mind and data was added to them.

As such it’s been necessary to create new protocols to support voice calling over 4G and it’s a big job, requiring upgrades to the entire voice call infrastructure. There’s no one standard for this, with different networks creating their own solutions.

There are some common problems and solutions, though, most notably the requirement for Single Radio Voice Call Continuity (SRVCC), which simply means that the phone will be able to switch back to a 2G or 3G signal if you move out of a 4G signal zone during the call.

This needs to be seamless or the call will cut out, so it requires masts to pre-emptively deliver a 3G signal whenever the 4G signal drops dangerously low, but also to keep the 4G signal running at the same time, so it can either stay on 3G if it loses the 4G signal entirely or drops the 3G if the 4G signal becomes strengthened again.

Both the network technologies are way better than our traditional 3G or 2G network. IMHO for mobile technology VoLTE is much better as it is an affordable option for consumers. LTE is still widely used technology and there are many places it is being used where speed is the first priority.